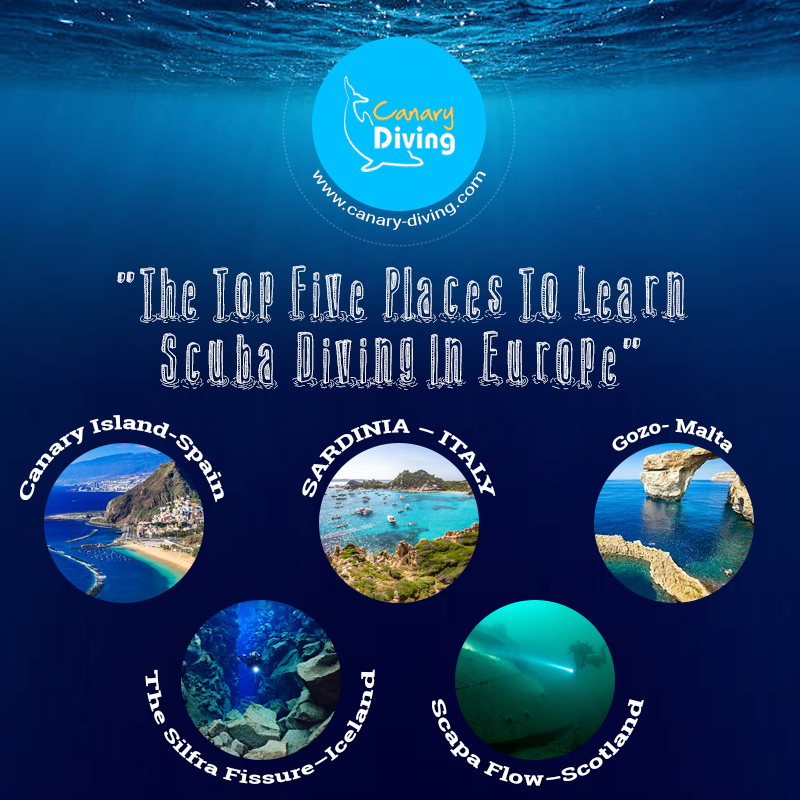 It would not be fair to associate Europe only with city breaks because the continent has much more to offer, primarily for diving enthusiasts. Wondering what? It’s none other than the crystal clear, blue waters, where you can enjoy a huge variety of dive sites and dive experiences .The best thing about scuba diving in Europe is exploring wrecks, reefs and artificial reefs, which are home to all kinds of species including exotic and larger Atlantic life ranging from the smallest stingrays to the larges whales. Excited already? Get your scuba gear ready while we break down five of the best dive spots in Europe, where you can peacefully learn how to scuba dive or experience dives you will never forget.

The Canary Islands located next to the Western Sahara is a Spanish archipelago in the Atlantic Ocean formed by eight major islands, namely Gran Canaria, La Palma, El Hierro, Tenerife, Lanzarote, La Gomera, La Graciosa and Fuerteventura. What makes the Canary Islands one of the top diving spots preferred by tourists and divers the world over is the crystal clear warm waters and the abundance of shallow exotic marine life and larger Atlantic species, as well as all year round good weather. Apart from that, it gives way to plenty of wrecks, caves and boulders formed from volcanic eruptions over thousands of millennia.
Due too its suitability for all levels of scuba divers, people regularly return to the canaries all the year round to enjoy some of the best and easiest dives sites in the world. From the wreck of cermona to El Cabron.

What generates curiosity in divers who choose Sardinia as the preferred spot for scuba diving are sunken warships ranging from ancient Roman and Greek wrecks all the way through too the wrecks from the Great Wars. Creating a graveyard of wrecks all to enjoy. A few examples are Entella and the KT12.

Two of the major attractions of this dive site are Azure Window and the Blue Hole. While the former enchants scuba divers with its massive rock formation, the latter draws interest with its collapsed limestone caves. You can get access to the latter by journeying through an elongated tunnel, filled up with sea horses, fireworms and octopuses.

This enormous crack of almost 330 feet deep, allow divers to explore the world, lying between two continental plates of North America and Europe. This will be one of the clearest waters you will ever enter.

Scapa flow enjoys popularity for featuring wrecks of seven German war ships, dating back to the WWII times when they sunk. Enjoying such a rare sight in close proximity is simply amazing!

Postscript:
So, when are you planning to learn scuba diving? Don’t miss out on Europe’s top dive destinations! Check out what each location has to offer and pick the one that grabs your interest. If it’s the majestic Canary Islands, Canary Diving Adventures – the PADI Diving School in Gran Canaria, can teach you the skills under the guidance of award winning professionals.